Ways to Tell If the Gold is Real Gold is one of the most valuable and sought-after commodities on the planet. Because of its value, inexpensive jewelry can be made to look more expensive if it appears to contain gold, even if that gold is fake. If you have a gold item, whether it is scrap or a valuable heirloom, you may be interested to know if it is an imitation or real gold. This is especially true if you are looking to buy such an item. Here are some ways you can tell if the gold you have or are looking to buy is real.

This article discusses the following steps :

This article discusses several tests you can easily do at home to help you when you need to know how to tell if gold is real.
Test its size and weight

This test applies primarily to bullion coins and simply involves checking the size and weight of your coin. Bullion coins are made to a set of specifications, giving you a reference point to test the authenticity of your gold.

Gold is one of the densest metals on the planet, with physical properties that are incredibly hard to replicate. This means that any metal used to copy a gold coin will likely be much less compact, and it would take more of it to replicate a certain weight of gold.

A fake one ounce Britannia, for example, would therefore need to be wider and/ or thicker to match the weight of a real one. Similarly, a fake gold Britannia with the same thickness and diameter as a real one would be noticeably lighter. Knowing the specified weight, diameter, and thickness of your gold coins will allow you to easily identify a fake.

This is another very easy test you can carry out at home with minimal equipment needed. Unlike most metals, gold is not magnetic and a real gold bullion coin, bar, or piece of jewellery will not stick to a magnet. You can try this at home with any reasonably strong magnet.

Try to pick your gold coin up with a magnet. If you are able to, you know that your coin, bar, or jewellery is made from, or at least contains, one or several other metals. Care should be taken with this method, however, as gold is not the only non-magnetic metal and it a fake coin could well pass this test. We recommend that you use the magnet test alongside one or several of the other tests mentioned in this article to be sure.

Testing gold by its sound

The ‘ping’ test, as this is commonly known, allows us to tell if a coin is made from real or fake gold by listening to the sound it makes when struck. Precious metals will make a long, high-pitched ringing sound when struck as opposed to base metals, whose respective sounds will be duller and much shorter. Balancing your coin on the end of your finger and tapping it with another coin should make a ringing sound, and the difference between a coin made from pure gold and one made from a non-precious metal should be obvious.

Dragging your gold over a ceramic plate is another quick and uncomplicated way to test your gold. Simply draw your gold across an unglazed ceramic plate, applying slight pressure. If you can see a gold mark on the ceramic once you’ve done this, then the gold is real. However if the mark is black then it is fake.

The least straightforward of these tests, partly because you risk doing permanent damage to your metal in doing so unless, of course, it is pure gold. The premise idea behind this test is that gold is resistant to oxidation and corrosion and so pure gold will not be affected by the acid. Different strengths of acid are available to test different carats, so gold that doesn’t react to the acid is at least as pure as the carat rating suggested, if not higher. Conversely, if you apply acid marked for 22 carat gold to your 24 carat bar, you know that your gold is at best 22 carat gold, and maybe not gold at all.

A piece of gold jewelry is often engraved with a hallmark, which is a stamp that identifies its content and/or manufacturer. Hallmarks usually appear in an inconspicuous place like the inside of a ring.

The standard purity scales are based upon karats and millesimal fineness. The hallmark test, also known as the magnifying glass test, is a good place to start when checking if your gold is real. Hallmarks include : 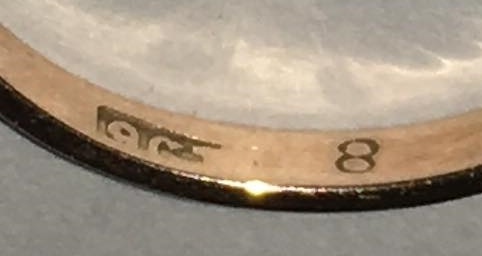 Hallmarks show the gold’s level of purity and manufacturer to lend greater credibility to a piece’s authenticity and to make it easier to identify and verify. Since anybody can engrave any hallmark they choose, this level of testing is not 100% foolproof

If the numbers say anything other than the ones mentioned above, then you have fake gold. For example, 800, 925, and 950 do not refer to gold, but to silver. Why would they be put 925 on gold? Because this often means the jewelry is gold plated with a sterling silver base.

Another thing to look for is whether or not the marks indicate that the value has either been measured in karats or in millesimal fineness. Any other numbers than those above would indicate that the gold is fake. Not all real gold jewelry has hallmarks—for example, older pieces may have had original markings that have been worn off.

Look for Bluish or Greenish Tint on Your Skin

This test is simple: It involves holding a piece of gold jewelry between your hands for a couple of minutes. The perspiration from your hands will either react with the metal and change the color of your skin or leave it unaffected. When real gold is in direct contact with your skin there is no discoloration. If the gold is fake it will cause your skin to turn black, blue, or green at the contact points.

One exception to this procedure occurs if you test gold on your skin while wearing a liquid foundation. When gold touches the makeup it will turn your skin black at the points of contact. Removing all makeup before testing makes this test more reliable.

Alternatively, makeup can also be used to test for gold authenticity. Put on a liquid foundation and add powder over it. Once the makeup has dried, press the piece of jewelry against your skin and then run it lightly over your skin where you have the makeup. If the jewelry leaves a black track on the makeup, you probably have real gold.

Drop the Item in Water

Fill a container at least half-full with water, plenty to cover your gold item with some to spare. Gently drop your gold item into the water. Real gold is a heavy metal and will not float, so if your gold item floats you know it is not real gold. Also, if you notice rust or tarnishing on the item after being in water, this is also a sign it is not real gold since gold doesn’t rust or tarnish. Given the risk of tarnishing, you may not want to do this experiment with an item that is valuable to you.

Find a place on the jewelry where you can make a small scratch, perhaps under a clasp or on the inside of a ring. Make a mark deep enough to scratch through the top layer of gold. Carefully apply a drop of nitric acid to the mark, and determine if the mark turns green or milky. There will be no reaction if the jewelry is either gold or mostly gold.

Nitric acid is a dangerous chemical, so you should take every precaution when handling it. Wear gloves and goggles, and be sure the room is well-ventilated. Given the potential damage this test does to the jewelry, you may not want to apply it to something of great personal value. At least consider having a professional jeweler do the test for you.

Just drop the piece into a container of water. Gold is dense. If it doesn’t float at all or hover over the bottom of the container, you could possibly have real gold.

Ways to Tell If the Gold is Real

How to Get the Best Deal Booking a Hotel

How to Trade Forex

How Do You Purchase Physical Gold Bars?

How to Get Money Without Working

You must read this before start your travel !

How to Sell Insurance